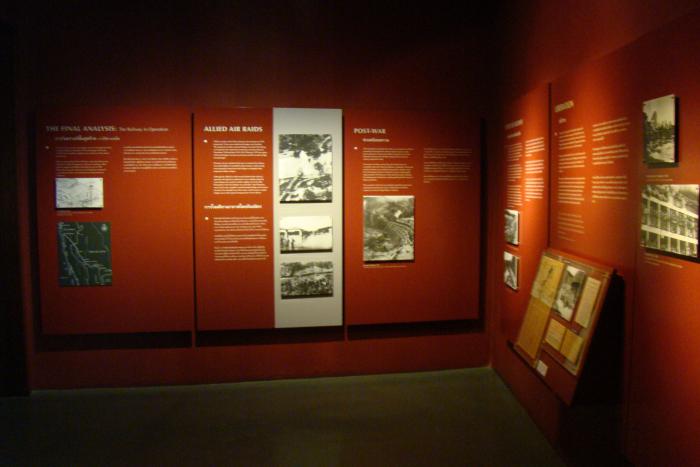 Hellfire Pass was the name the Prisoner of war(POWs) gave to the largest of a 1,000 meter series of mountain cuttings through soil and solid rock, which were accomplished with minimal equipment(3.5 Kg. hammers, picks, shovels, steel tap drills, Can baskets for removing dirt and rock, and dynamite for blasting). The prisoners called it “Hellfire Pass” because of the way the largest cutting at Konyu looked at night by torchlight. In 1988, The Australian-Thai of commerce completed the first phase of Hellfire Pass Memorial project. The purpose is to honor the allied POWs and Asian laborers who died while constructing death railway.

The Hellfire Pass Interpretive Centre and Memorial Walking Trail is located just above Hellfire Pass (Konyu Cutting). It was built and is maintained by the Australian Government. Opened 25 April 1998 and refurbished and rededicated on 12 December 2018, it is dedicated to the allied prisoners of war and Asian labourers who suffered and died at Hellfire Pass and elsewhere in the Asia-Pacific region during World War II.

The decision to build the interpretive centre was taken by Prime Minister Paul Keating in 1994 when he attended Anzac Day at Hellfire Pass. This was the year in which a portion of the ashes of the prisoner-of-war surgeon Sir Edward Weary Dunlop were buried at Hellfire Pass. Moved by the ceremony Keating gained the approval of the Thai government to build the interpretive centre. Hellfire Pass, like many other sites that Australians sometimes claim to own given their centrality to the national memory of war, resides on foreign territory and on land controlled by the Royal Thai Armed Forces Headquarters.

In 1995-96, the Australian Government allocated $1.6 million for the construction of the interpretive centre. With bipartisan support, the Hon. John Howard continued to support it when he became prime minister in 1996. A refurbishment project was undertaken in 2018-19 with a rededication held on 12 December 2019.
The building of any centre raises complex issues of interpretation, particularly if the history it displays is difficult.
In Australia, some ex-prisoners of war feared that the interpretive centre might play down the atrocities perpetrated by the Japanese, or might suggest that their work on the railway had contributed to the Japanese war effort.

The Thai government preferred that the interpretive centre promote reconciliation, rather than dwell on the circumstances of the Japanese occupation some 50 years earlier.
The designers of the interpretive centre aimed to present the story of captivity in a balanced way with minimum use of physical artefacts. It is not so much a centre as an interpretive centre, which prepares visitors for the experience of visiting the cutting below. In this sense, it is different from other centres in Kanchanaburi.
The interpretive centre presents the history of the Burma-Thailand railway under chronological and thematic headings, explaining the rationale for the railway, the way in which it was constructed and the hardship experienced by those who worked on it.

At first, the content was criticised for being too Australian because much of the visual and textual material it presented was drawn from Australian prisoners of war. However, all the text has now been translated into Thai, and the story of the Asian workers (rǒmusha) is also included.
In recent years, most of the 100,000 or so visitors each year to the interpretive centre have been non-Australian. The comments in the visitors book show that the centre contents inspire a sympathetic response from people of many nationalities.

The interpretive centre is a place for reflection about the suffering of those who built the railway. Its contemplation desk, overlooking the Kwae Noi Valley, the beauty of which many POWs commented on even as they suffered, contains a peace vessel by a former prisoner Peter Rushworth.

The interpretive centre provides visitors with an audio tour guide to Hellfire Pass (Konyu cutting) and the walking trail below. On the walking trail are interpretative panels, several cuttings, the sites of the massive Three-Tier Bridge and Pack of Cards Bridge, the impressive 7m embankment, and Hintok station where trains passed each other.

Although the bridges no longer survive, the landscape reveals the profound difficulties of constructing the railway in this steep and rugged terrain. Where the walking trail begins there stands a black stone pyramid-like memorial to all who suffered and died in 1942-45. Critics claimed that its installation in 2005 had desecrated the grave of Dunlop, but it forms an effective focal point for Anzac Day ceremonies. It is also less explicitly Christian than the cross, which had been used on some previous occasions.